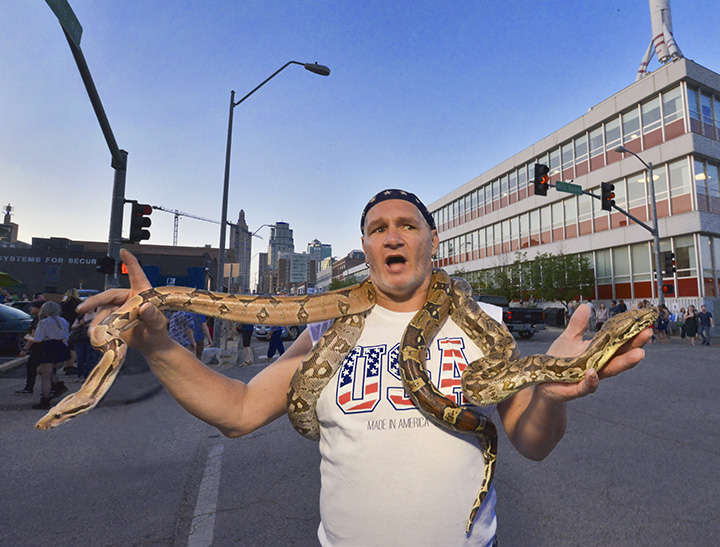 Greg Emlet wanders the Crossroads District with two of his snakes, Sir Robin, left, and Atticus, when First Friday coincides with good weather. “I love meeting people” Greg says, and the snakes sure are a conversation starter. Roy Inman Photographs©

Greg Emlet  was not happy with his snake Atticus (as in Atticus Finch, “To Kill a Mockingbird”), so it (a Demeril’s boa) was not present this day at Loose Park. Greg left him at home to sulk.

“He’s shedding” Greg explained. And when that happens Atticus apparently gets a bit cantankerous. 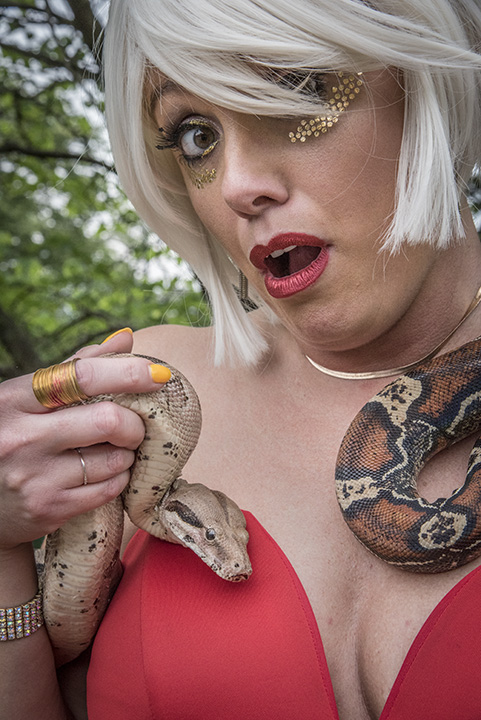 Slutterbell and Sir Robin hit it off immediately. Here, he was getting perhaps a bit too cozy though. Roy Inman Photographs©

But Greg did have with him Sir Robin (after Robin Hood), a Columbian red tail boa. Sir Robin was also shedding, but was much more docile, and by the end of the shoot, he was finished shedding and ready for his close-up.

Also in attendance was a local personality, Slutterbell The Every Fairy, aka Brie Henderson, aka director, producer, actress and writer. She and Sir Robin became fast friends. She found him “coily”, warm and calm. That relaxing feeling holding a snake is one of the things that attracted Greg to the reptiles. “They calm you down” Greg said, “and make the world seem peaceful. They aren’t like puppies or kittens, but they have a quiet nature.”  He feeds them rats, BTW. 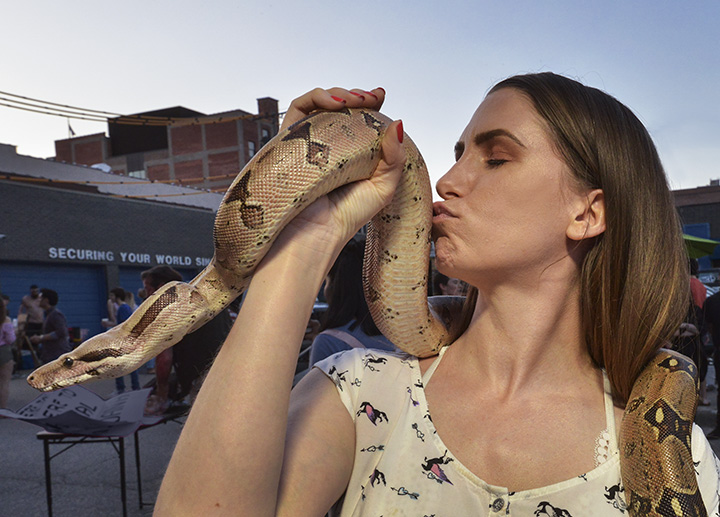 Slutterbell found Sir Robin so quiet that she almost fell asleep. It was her first time to wear one she says, although she once tended to a snake for a friend. “I speak snake. In school, I had to learn it.” Slutterbell may sometimes exaggerate just a wee bit J 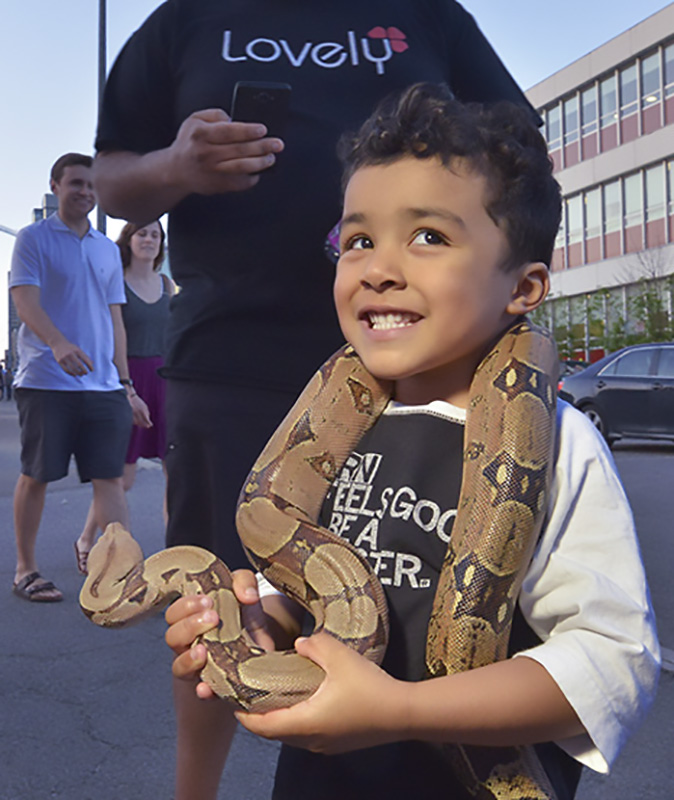 Greg has been a snake owner since about 2005, when he encountered ones owned by friends who had them at the KC Renaissance Festival. He currently has four, and typically carries around two.  He takes his snakes with him like other people take their cats or dogs.

The snakes attract lots and lots of people that Greg says he might never otherwise meet.  “I have talked with people from Germany, Japan, from all over the United States. I love meeting people.”  He even takes Atticus car riding (when he is more sociable), draped around his neck in knot-like fashion, and takes him inside when he stops at Quick Trip. You think THAT doesn’t raise some eyebrows?

One day a few years ago Greg was visiting Loose Park and a group of prom kids were posing for pictures with the flowers and fountain. They saw the snakes and thought it would be cool to pose with them. “It went viral” Greg recalls, “and since then I have done more proms, homecomings and birthday parties.”

I noticed in my two outings with Greg and snakes that the guys were not as interested in holding the six-foot-long reptiles, as were the gals. “Yes, that is typical” he said. “Girls and women seem to be more at ease with them. “ So much for the macho man myth. 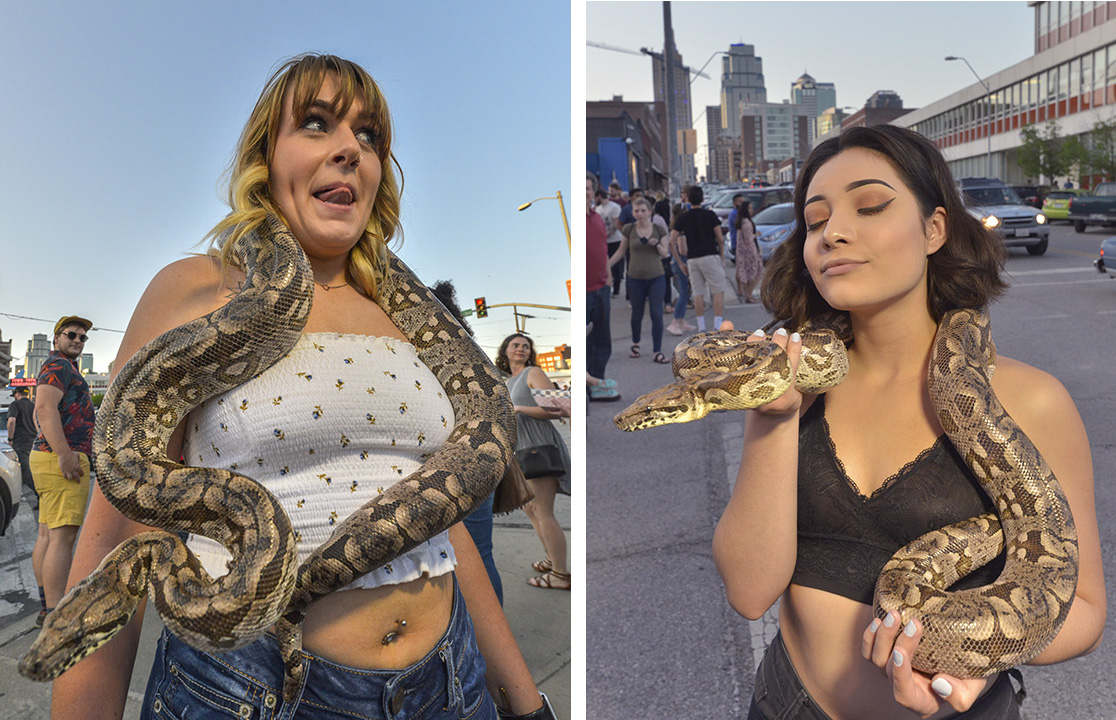 Reactions ranged from “Uh, I am not too sure about this…” to “I am like, SO contented holding this snake.” Roy Inman Photographs©