Hard to imagine that William Shatner, aka, James T. Kirk, Captain of the Star Ship Enterprise, turned 87 this month.

Last October, when he was “only” 86, it was apparent he had not lost any of his commander of the bridge attitude, take charge persona and Shatner swagger.

The house was packed that autumn night at Johnson County Community College’s Carlsen Center to experience “Shatner’s World: We just live in it.” The shoulder-to-shoulder crowd was not disappointed. For nearly two hours he held the audience spellbound talking with great animation in that distinctive Shanter temblor and cadence, bounding around the stage as would an actor 50 years his junior. He interspersed it all with film clips and stills from his childhood years to early stage work (he appeared in three Broadway plays) movies, of course that life-defining role in Star Trek, and other TV series’ on a huge screen behind him. It was enrapturing.

I was there with wife Barbara, first assistant and cuz, Lonnie Miller and his friend Jerri Rogers to shoot the “meet ‘n greet” photos (otherwise known in the photo biz as “grip-n-grins”) after the show. Those fortunate (and flushed) fans who had purchased orchestra seating were allowed a photo with The Man.

We arrived an hour before the performance to get the lay of the land, set lights and figure out our strategy.

The room assigned to us was smallish and sort of pie-shaped, narrow at the front and wide at the back. JCCC’s logo dotted a backdrop held up by two stands. A single bar stool completed the set. Or as one wag described it “A barstool without a bar.” About 3/4 of the room was filled with empty chairs but the first row was so near to the backdrop that we had to compress several of the rows to give me, the camera, tripod and lights a little breathing room between us, Shatner and the star-struck Trekkies.

All was in readiness. Or so we thought.

There was a ten-minute delay between the final curtain and Shatner’s arrival. He entered a side door that led to outside, surrounded by a bevy of Overland Park police and campus security. I figured they had led him in that way to avoid the crowd, slowly filtering out from the hall and still chattering about his virtuoso performance.

He ascended the barstool as though it was a throne and it was obvious he was a man on a mission: “OK, let’s go!” he barked. “I have to make a four-hour drive to Rolla Missouri tonight for a gig tomorrow!” (It is actually more like a six-hour drive, but none of us mentioned that. If he had known how long it really was, he might have left right then and there).

Shatner had some instructions for me: “Photographer, none of this ‘one, two, three.’ Just say ‘go’ and shoot. ONE shot! And we won’t allow any cell phone photos!” Yes SIR, Capt. Kirk!

So here was the setup: The door to the right of my camera was where the orchestra pit audience members entered, a table covered in a black cloth was where people would leave their wraps and purses was nearby. I would strike the likeless, the posee would pick up his/her belongings and file out a door to the left of my camera. I was surprised that shooting a single image per set, I only got one sleeper (blink). 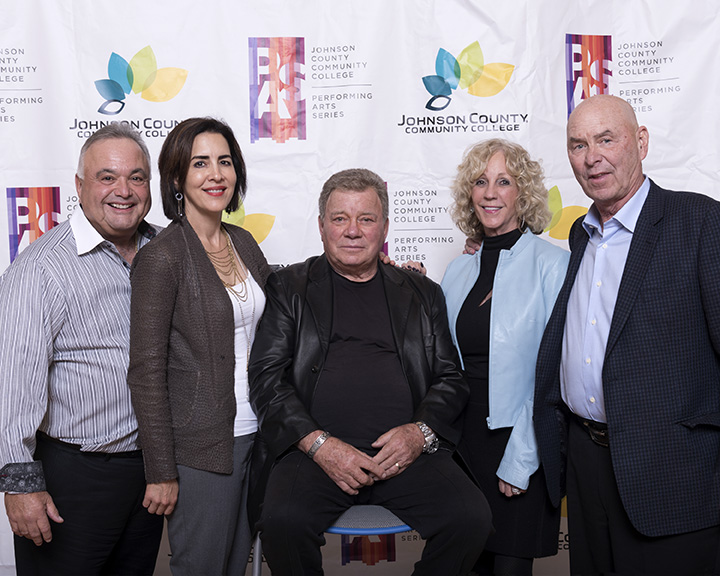 The family of a local Italian restaurant prepared a meal for Shatner to eat on his long drive later to Rolla, Missouri, and also got to pose with Capt. Kirk.

After a few shots (“ONE shot per person!”) it became obvious that the folks being photographed with their hero were causing a traffic jam in front of the camera as they had to pass back in front me to retrieve their belongings.

Shatner saw this confusion, and in that same tone and commanding voice  he used on the bridge of the Enterprise, said “Somebody move that table over there on the right over here!” and pointed to camera left. I then realized we were in a room full of volunteers, who were quite intimidated by the star ship captain. Fortunately, Lonnie and Jerri got it immediately and moved the offending table as instructed.

But we still had problems. 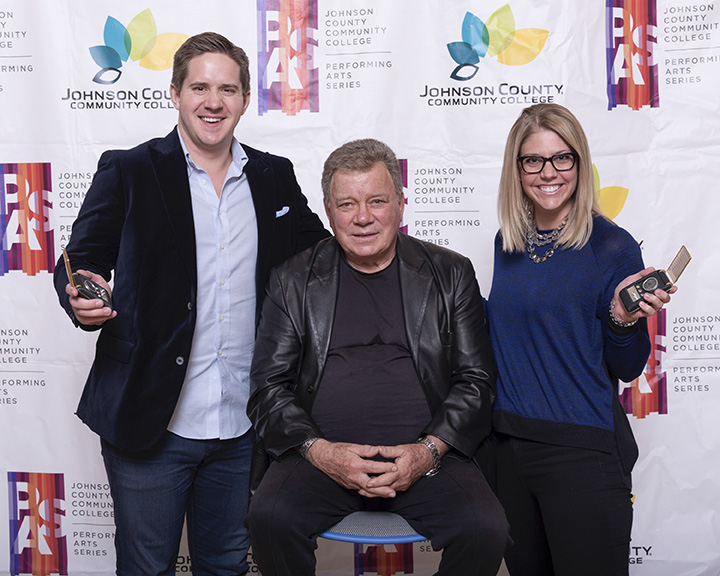 One couple brought their expensive, Star Trek-styled cell phones for their photo op.

Looking around the room, he said “Why is it so slow? Why aren’t they coming in faster? “Who’s in charge here!?” He was now looking straight at me. Thinking he was kinda-sorta joking, and seeing no other responses from the stunned, tongue-tied gaggle of volunteers, I gave a toothy smile, and holding my hand at my midsection, pointed a finger at the unsuspecting Lonnie, who was dutifully standing to my right as a proper first assistant should.

Shatner caught it and looking straight at Lonnie said “You, you’re in charge! Why aren’t you doing something!? You’re just standing there!

“You’re useless, just useless! Go outside and bring people in! Go on move, you’re just useless!” I was wondering how many times he was going to say “useless”.

By this tine Lonnie looked as if he was at once startled, incredulous and angry. He would later relate to me that he came that_____close to saying something, but bit his tongue.

Lonnie slinked out to shoo in some photographees.

But people still weren’t moving at the warp speed Capt. Kirk expected. Now in full-blown, at-the-helm, Starship Enterprise mode, he wanted to know “Where is that long-haired blonde guy!?” I replied “He went outside to get people moving.” “Well good” Shatner said. “He was just useless, standing around!”

After a couple of other logistics changes, the evening proceeded apace. We had William Shatner, aka Capt. James T. Kirk of the Starship Enterprise, on his way-driving, by himself-to Rolla before 11:00 PM.

I chalk up that evening as another of those weird, funny, off-the-wall experiences that one encounters along the photography trails. Even Lonnie now sees it as more humor than insult and in fact considers it a point of pride that he and he alone was singled out that night by one of America’s pop icons.

Who else, I wonder, can say that they have been called useless by a Starship captain? Hmmm…maybe more than I realize 🙂 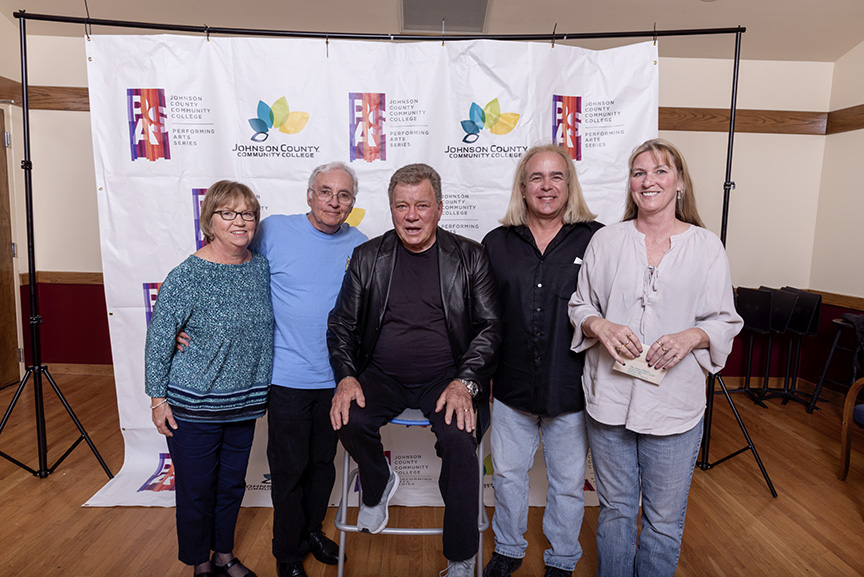