When DID humans discover how to make fire? Best guesses are between 700,000 and 120,000 years ago. Most likely, naturally occurring blazes ignited by lighting strikes first got the attention of our ancestors. I mean, like, who could NOT notice a huge savanna aflame, columns of smoke rising hundreds of feet in the air? Animals fled these infernos, and cave guys out on the hunt found it was easy pickings to trap, spear or use whatever other weapons they had to grab supper on the run. Some animals were burned in such conflagrations and early Homo sapiens found out, “darn, that tasted pretty good!” Not only was it easy on the palate, modern research has proven that cooked food provides more calories than raw, which gave those guys more energy to chase game. It also made for improved brain growth and helped in baby production.

It came to pass, so anthropologists tell us, that certain men (and maybe women) were designated “fire preservers” and used slow-burning animal dung to sustain fires. Uh, yeah, like pretty stinky! There is evidence of these keepers of the fire in early human activity around the globe. Perhaps THAT is really the oldest profession 🙂 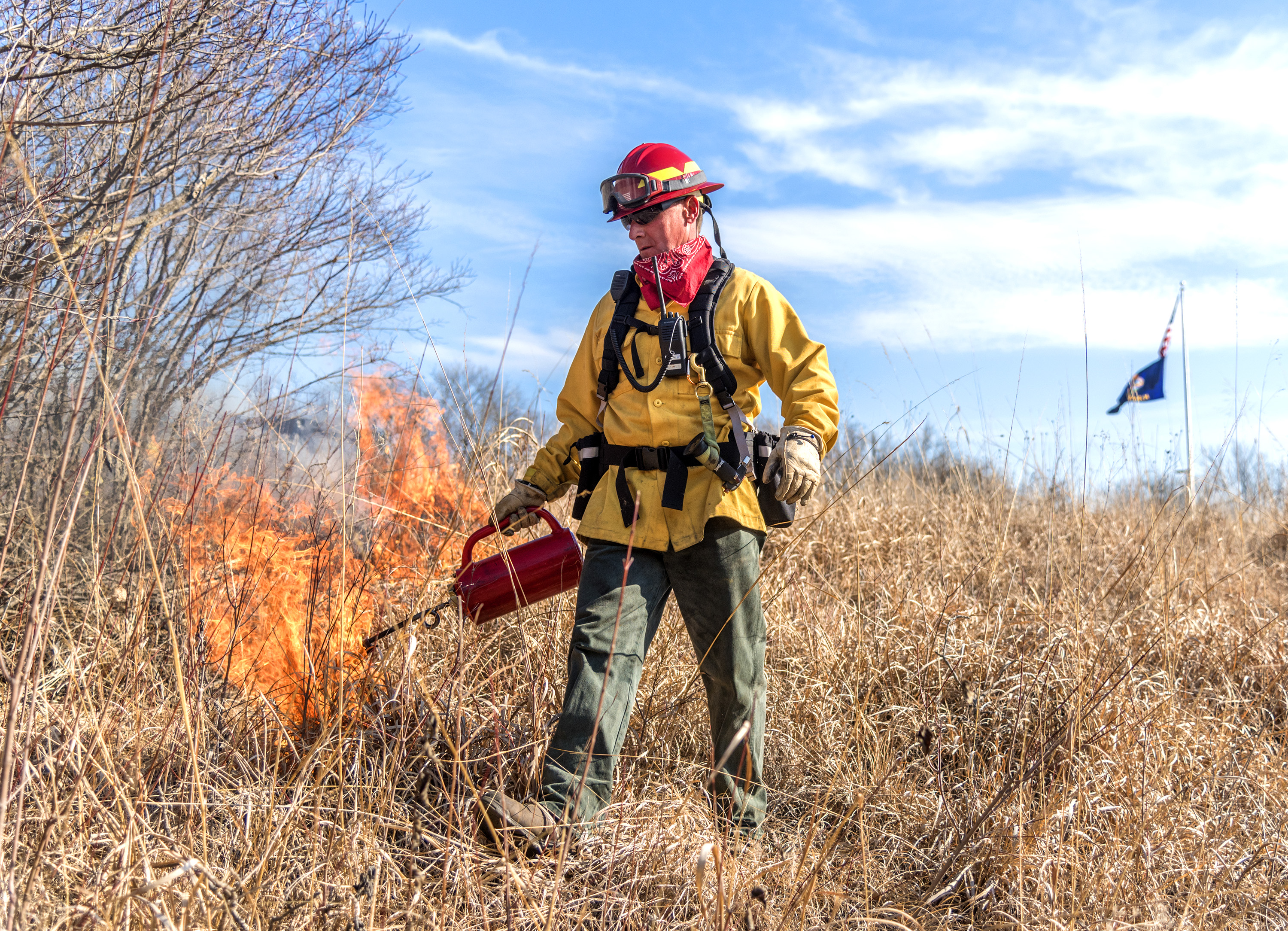 In the fullness of time, some early genius, or geniuses, fiddled around with rocks and sticks and figured out how to artificially create fire. Hot dog! (Pardon the pun) Now they could control the stuff. They could use it to cook their own food and not have to wait for a lightning strike, and Voila! The birth of the outdoor barbeque! Fire also helped keep away the saber-toothed tigers and other undesirables that liked to eat humans. Unlike our species, other animals never learned how to create and control fire.

Hinduism, the third largest religion on Earth, sees fire as a purifying element that hastens the soul of the deceased to the afterlife, hence the traditional cremation of the body.

Without fire we might or might not have survived as a species, but for certain we would not have advanced to landing men on the moon, warming and illuminating our homes and cars and setting fire to neighbor’s roofs with bottle rockets. 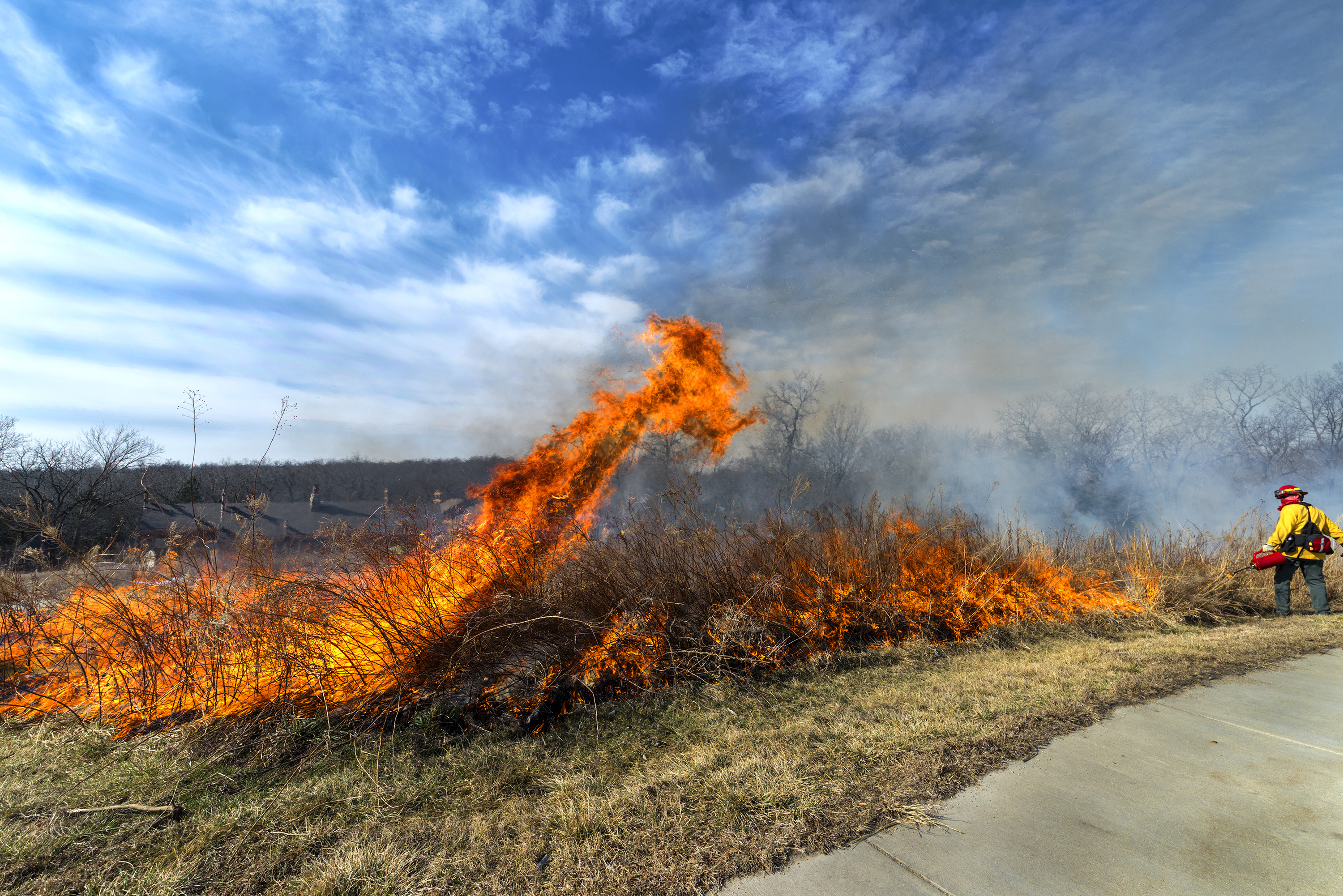 But getting back to lightning strikes: Before Olathe, Kansas and the vast, larger prairies to the west were settled, nature provided a “cleansing” of trees (a tree is a “weed” on a natural prairie) etc., with those same naturally-occurring fire storms started by lighting. Now, in a densely populated human environment where fire is discouraged, and where there are invasive plants taking over (such as the dreaded, invasive eastern cedars!), humans must manage what is left of native species of grasses, and they do it partly with fire. Besides eliminating many of the –non-native plants, a bare, exposed earth allows the sun to warm the ground, helping give birth to new, non-woody growth. If you are a robin or some other bird that likes worms and bugs, it is also a great time to find them. The blackened ground sans foliage makes the aforementioned bugs and worms more visible and accessible.

This spring I recorded one such controlled prairie burn at Ernie Miller Nature Center at K-7 highway and 127th ST on Olathe’s west side, the first in three years at that location. The Johnson County Parks and Recreation Department stages burns, like this one, on a rotating schedule at several park sites. Some years weather conditions do not permit a burn at all: high winds, too much or too little rain, coupled with a narrow window of optimum times in Spring determine whether our old friend (and sometimes nemesis), fire can be successfully employed. Nature’s remedy, lighting strikes, cannot be relied on. They are too unpredictable. 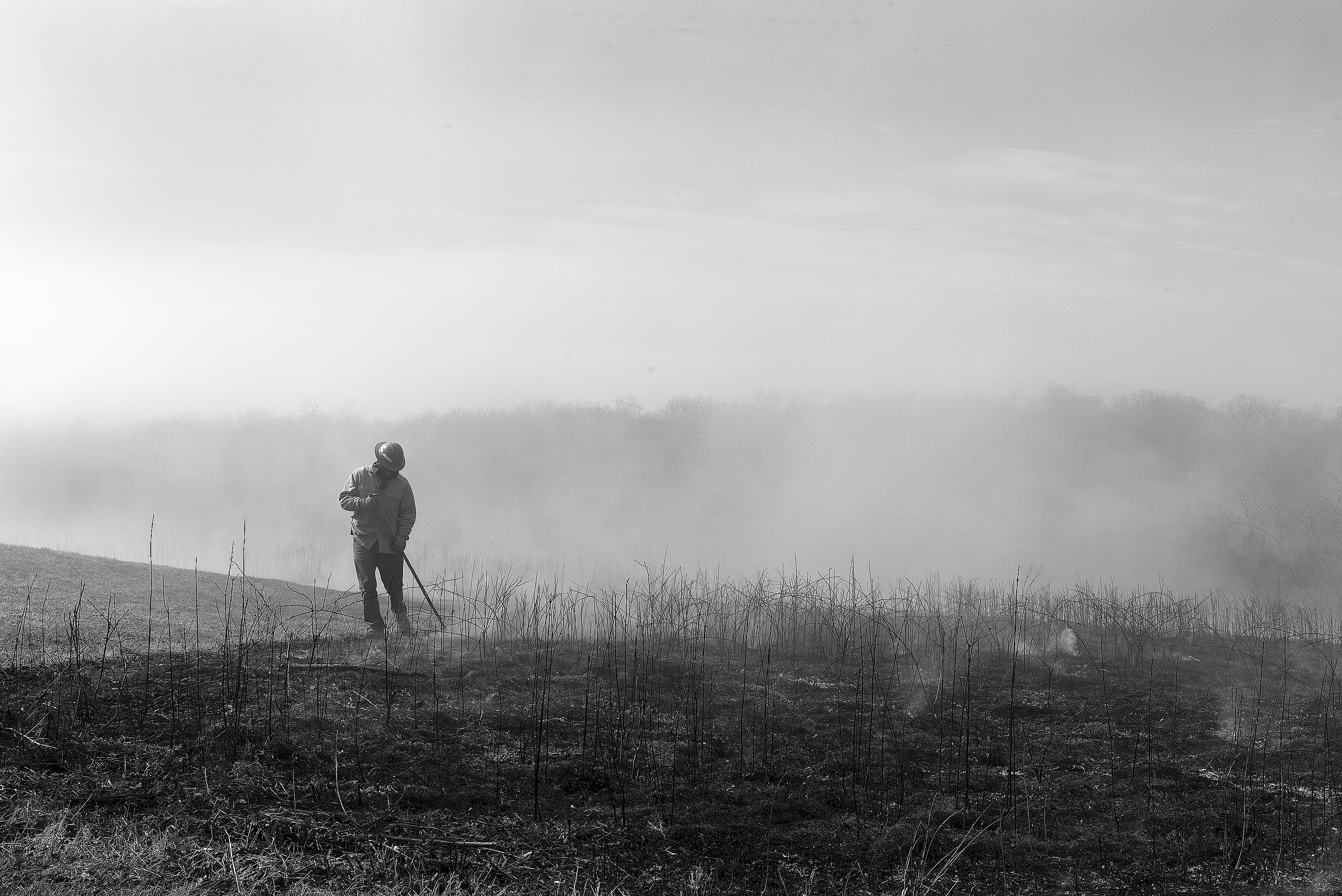 Fire is, indeed, a mechanism for rebirth and renewal, a powerful cleanser for all of life on planet Earth. From our sun to our calorie burning bodies, we could not exist without it. 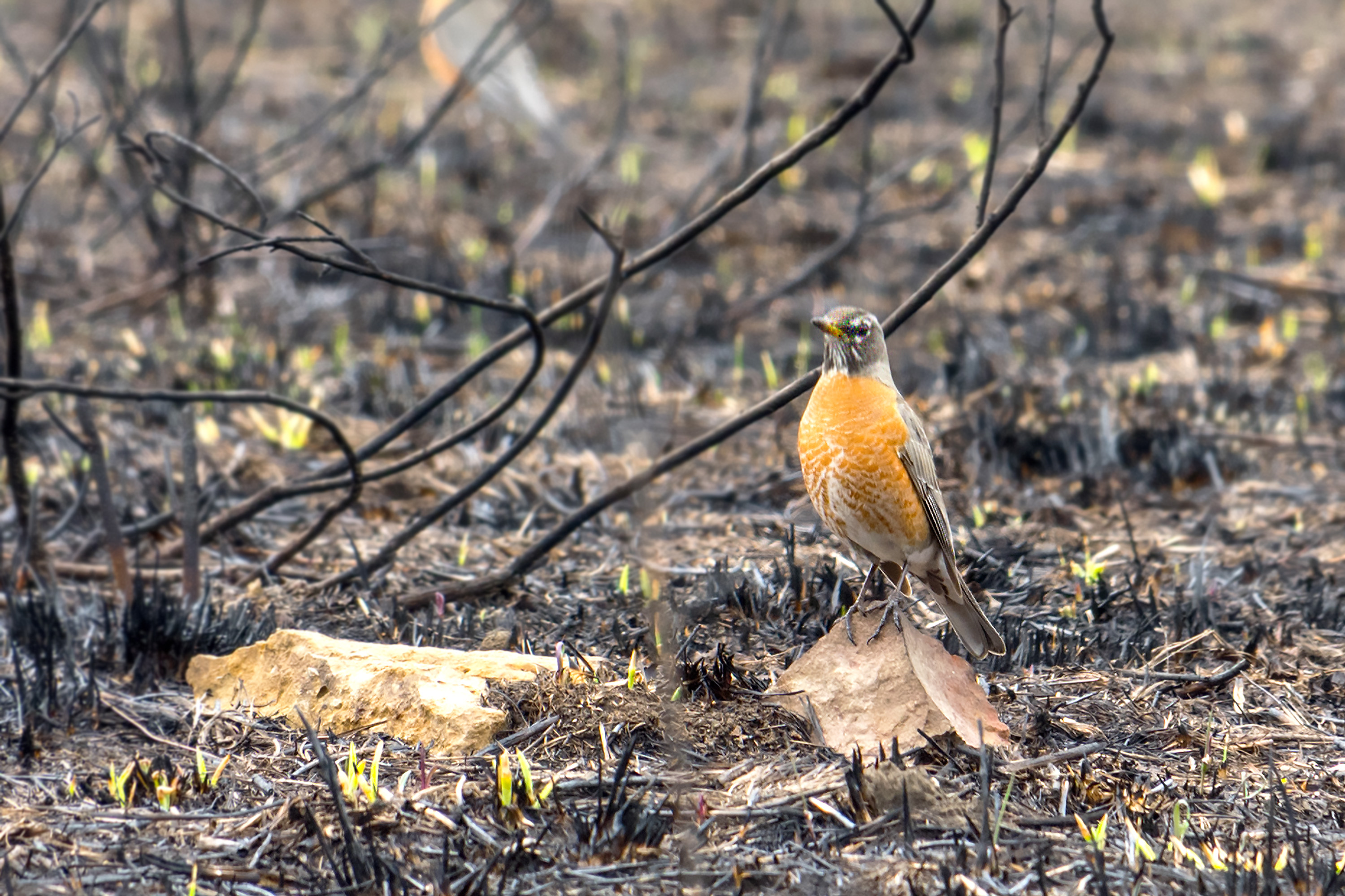